Driving along a road with the deep blue Pacific Ocean spreading out before their eyes was a refreshing sight for the team, which had just finished driving through the high, dry plains of the Andes. While a road hugging the coastline sounds picturesque, in reality the wind was blowing in from the Pacific with such force that it battered the cars. The road stretched out endlessly before them. Sub-Captain of the team Adachi realized that there were almost no walls in Chile to block wind. “I hardly get tired driving on long straight roads like those in the interior. But it’s hard to drive straight here when you’re going fast. The car pulls in the direction of the wind.” If the steering were more responsive under straight driving conditions, it might boost Toyota’s product strength. This thought went through Adachi’s head after driving on the highway for several hours. Goto from Toyota Planning Division 1 is a team member with an administrative job. He says, “Even though my understanding of cars can’t compete with our engineers, I hope to discover different things from a perspective similar to customers.” While driving on the highway, Goto pointed out how difficult it was to read his digital watch. Drivers on Chile’s highways use their headlights in the daytime, which causes digital watches to switch their brightness to nighttime mode. His digital watch face is barely visible with sunglasses on. How much are local driving customs taken into consideration? How much are specifications able to differ? Does eye color affect visibility? Goto had a sea of questions to take back with him to Japan. 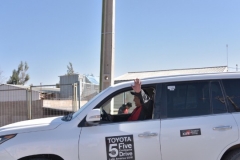 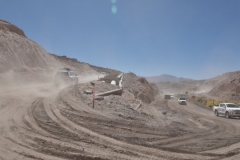 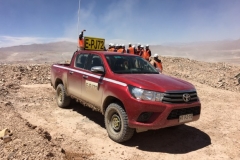 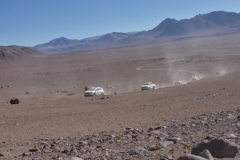 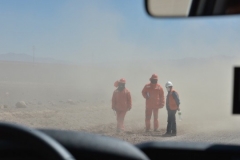 Getting buried in sand makes the team think again about a car’s power.

Under the direction of Masahiro Terada, who has raced in the Dakar Rally, the team spent a day driving on a special stage—a dirt road that was part of the Rally course. A driver uses a navigator to read the map and feed the driver course information assigned to each car. The team worked together to complete the challenge of driving on the up-and-down dirt road course. They had to battle the road, but the four-wheel driving was also exciting. The team even seemed to relish digging out a car that got buried in the sand, knowing that they were lucky to have this extraordinary experience. The driver of the Hilux that got stuck, Yasunaga from the Public Affairs Division of Myochi Plant, comments, “ABS is about the only control system I’ve experienced on regular roads so far. But today I experienced firsthand the auxiliary support provided by a number of systems and saw how important they are.” Okano, who is involved in developing self-driving technology as part of the Chassis Advance Development Division, was satisfied with the day’s drive, but had a sudden sobering thought on the way back. He said he realized just how much cars had helped him out in the past. While control systems are effective at avoiding dangers in front of a car, he says he became painfully aware that they are no help if the car gets stuck, and that self-driving technology is still not feasible on dirt roads where conditions are difficult to judge. “First, people want cars that run properly. It feels like I’ve been told this in no uncertain terms.” How much of a bubble had Okano been working in? Okano laughed dryly, as the roads of South America burst his bubble about the outsized importance of his work.

The goal is a turning point, with genuine smiles waiting on the other side.

In Team 2’s goal of Santiago, a large group of Toyota Chile employees were waiting to welcome the Drive Project team to their grand finale. Tanaka of the Master Skills Division, who has participated in all of the past Five Continents Drive Project legs, discussed the trip with a relieved look on his face, saying, “This one was the toughest yet. The high altitudes were rough. But no matter what country we were in, seeing the roads and the cars driving on them was fascinating.” Many team members appear to be looking at South America differently after their genchi genbutsu experience. The locals in the driving destinations of Peru, Bolivia, and Chile who animatedly told the team about what they needed from their cars seem to have struck a chord with Yamada of the Prototype Division. He says with self-admonition, “I realized that I can’t lump specifications for South America together in the ‘Other’ category.” Staff from the Latin America Division in Japan say that they have a very hard time getting feedback from Latin American locations incorporated into development. It’s hard getting other people to understand the real problems people face from something like dirt getting in their car. There’s also the problem of the distance from local markets. But better cars are most definitely possible if these problems get resolved one by one. The Drive Project team members will keep driving toward their true goal in South America. They know that the smiles waiting for them are too many to fit in the “Other” category.

We are here to help! Send your inquiry by filling the form:

Cheer Up:
Send your best wishes and strenght to the pilots from where you are!

Questions:
Got a questions for our pilots? Send them here!

Live Report:
Check all the details of the expedition in our reports. Constantly updated!

Gallery:
Experience up-close and personal all the expedition journey on amazing pictures.

All Reports:
All the available Live Reports arranged in an easy way to explore!

Status:
The vehicle with this tag is not active in the current stage.